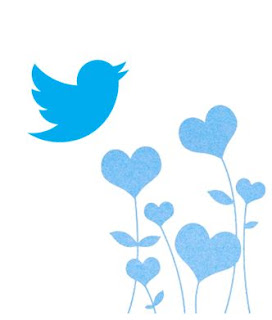 A mere four and half months ago, I dipped my toes into the 'twitterverse' for the first time. Has it only been that long? I blogged at the time about my first week survival story, and exactly a month later, my experience of the social-media implosion that resulted. More than three months later I am still on twitter (more than ever!), and thought I should post a little update.

Okay, so I know there are some out there with THOUSANDS of followers. That can be a little intimidating and depressing when you're still looking at mere hundreds on your profile. But really, is that a bad thing? I decided to take an organic approach to growing my tweep circle, and tend to follow people I find via...


*Let me just say right here that I do not auto-follow. No one should be so desperate as to follow every single twitter user/account/spammer that comes along. I always check a sample of their tweets before following. If it looks like spam but they don't bother me, I ignore them until they eventually go away. If they start messaging or tweeting rubbish at me, I block them.

"But you can do what you like on twitter...can't you?" NO. Goodness gracious, no. Like any other human interaction, twitter has etiquette all its own. But thanks to being a new platform that many writers seem to be thrust onto without a great deal of internet savvy, this is often forgotten. Okay, so I'm more than certain I've broken ALL the rules at some point or another, but there are a few obvious things I've observed which make all the difference.

Say hello when someone follows you. "But WHY?" you might ask. Because we're all essentially strangers. I still feel incredibly awkward the first time I try to jump into a twitter conversation. Saying 'Hi, thanks' right after a follow means you've opened up the communication channel (AND been polite. Mom will be proud). It also reminds them that you are a real person with an active feed, and lets them know that you noticed them as a human being too.

I try to say a tweeted 'thanks' to everyone who follows me. I'm sure I get behind and miss people completely (sorry!), but I at least try. So as not to clutter up my twitter feed, I tend to combine the latest 5-8 followers in one tweet. No one seems to mind, and they also get exposure to other tweeps! Win-win.

Best example: I once followed someone, and when they followed back they tweeted a thanks AND commented on one of my latest tweets. They got added to my 'Faves' list instantly. From one tweet.

Does that sound harsh?  But you all do know what I mean. How can anyone follow hundreds (or thousands?) of people, read ALL their tweets, and still have time for a life? You just don't. So the order of the day is prioritisation.

There are likely many more ways to stay organised with your tweets (please feel free to add any tips!), but two things have helped me wade through the ever-rising tide of tweets and tweeps: Twitter Lists and Tweet Deck.

There are new apps and software options emerging all the time, however, so try out a few and find out what suits you best. Some others (which I have yet to try):

Here are a few brilliant folks (in no particular order) I've been following and interacting with lately and are worth checking out. They tend to be knowledgeable, generous and all have the ability to make me laugh until I embarrass myself and others :

Ksenia Anske (@kseniaanske) - Young Adult author with an uncanny ability to articulate the fears and joys of writing your heart out. Her tweets and blog posts are pure sustenance.

Jennelle Holland (@authorjennelle) - Romance writer, sock-monkey adopter and regular blogger at Teatime Romance. Jennelle chats about amazing food inbetween reading and reviewing a mad number of books. A woman after my own heart!

Maisey Yates (@maiseyyates) - romance writer with a penchant for (very) rich sheikhs (in her BOOKS, silly), there is never a dull moment in this woman's twitter feed! I submit the fluffy purple unicorn as proof.

Karen Woodward (@woodwardkaren) - Urban Fantasy author who really knows how to blog! Whenever I'm feeling underqualified to do anything in this writing world (which is often), I'm off searching Karen's archives like a fiend.