Tonight marks exactly a month since I dove in the deep end of Twitter (and several other social media sites).

As a new / 'indie' / self-pub author you are bombarded with advice from all angles about blogging, guest-blogging, tweeting, book trailers, conferences, live tweet-chats, writing contest, flash fiction, tweet fiction, Facebook, Klout, Pinterest, Tumblr, Flickr and any other cute new site that ends with 'r' (and should REALLY have an 'e' because really...they're spelling it wrong). And published or unpublished you must push push PUSH your social media 'platform' so that you have a network or an audience or a 'sphere of influence'... 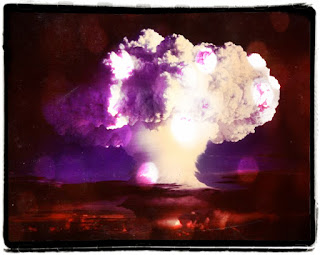 Steve King says to 'shut the door' when you write. Shut the door? How can I shut the door when I've just woken up to the reality that I am no longer in a room that HAS a door? And there is no door because I'm sitting in the middle of a airplane-hangar size waiting room full of other people all shouting at the top of their lungs to be noticed and there IS NO DOOR.

In a small, quiet moment, your mind finally says...'Enough.' And it implodes. Slowly, gently.

And you remember something.


So here's the lesson I teach myself today. The airplane-hangar will always be there. But sometimes...you have to shut the door.


Image credit: United States Department of Energy via Wiki Commons, 1952. Alterations by me.