A question of genre...


I'm a huge fan of George Takei, both as Mr. Sulu (yes, I'll admit it, I'm a not-so-closet Trekkie!) but more recently as a follower of his fan-fed humour feed on his Facebook page.

That being said, I have a teensy bone to pick with one of his recently posted memes: 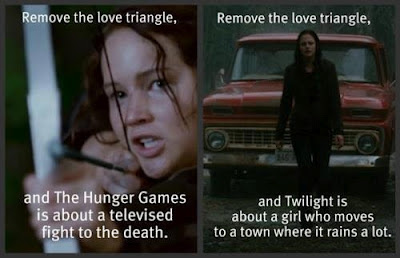 Okay, so we all like to join in on a little Twilight-bashing from time to time. It's popular, it's riddled with teenage angst and did I mention that it's incredibly popular. I will be among the first to start listing the elements about the series (the books or the films) that irritate me, but in this case, I'm stepping up. I'm standing up for Twilight. Perhaps not as an entry into the great writing of Western culture. Perhaps not as a generation-defining masterpiece. What I want to defend here is the genre.

This story is set in a futuristic, dystopian society. The central plot focuses on the fight-to-the-death survival story. Genres we could easily assign would be Science Fiction, Fantasy, and Young Adult. Is there a romantic element in the story? Yes. But it's a sub-plot.

In my mind, Twilight fits into several genres if you consider the series as a whole. Fantasy, Young Adult, Vampire. Some might say even Urban Fantasy due to the concentration on Forks, Washington and the supernatural elements. But if we're looking at the first book particularly, the most important genre categorisation here has to be Romance.

My evidence? Vampire-boy meets human-girl. They fall in love. The competing character of Jacob gets in the way, along with that tiny issue of Edward being a vampire and Bella a human and how it means they can never be together (perfect plot device!). Love prevails. Yup. That's a romance.

Just to double-check myself I went onto Amazon.co.uk and checked up on the genre categories that each book was listed in, as they're usually pretty accurate:

Oh hey! Look...they pretty much match what I thought. Fancy that.

Okay, it's simple really, and you've probably already sorted this out. But just to be clear.


A. Remove a romantic sub-plot from The Hunger Games, and yes, you will still have an intact plot.

B. Remove the central plot from Twilight, and of course you have nothing left but setting!

I rest my case. And I shake my pompoms for romance. Because, after all...love is important. And it's still pretty damn popular, even if there isn't always a fight-to-the-death-survival story included. Oh wait...wasn't there one of those in Twilight...?